The Birth of Potography 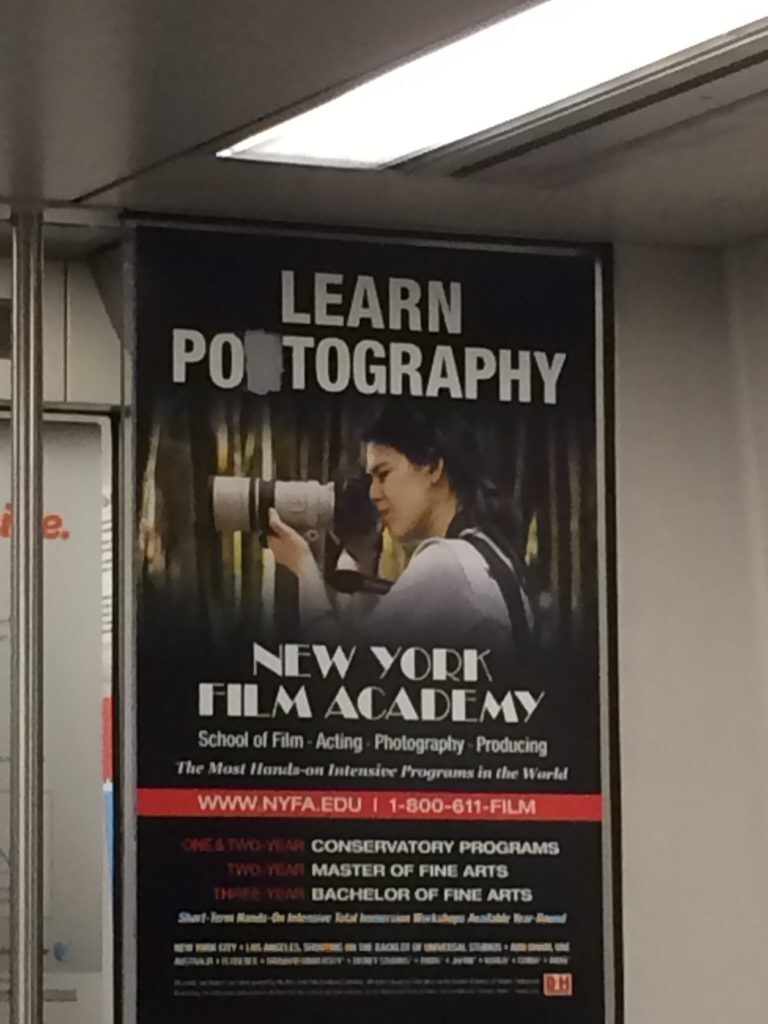 New subscribers get 20% off!

Potography started as an inside joke.

I was riding the Long Island Rail Road one day when I noticed an ad poster with a missing letter.

I think it originally read “POHTOGRAPHY,” and someone ripped off the “H” in an attempt to correct the typo.

Whatever happened, all I could see was the word that remained: “POTOGRAPHY.”

I immediately realized that “pot-ography” was the perfect play on words for “cannabis photography,” so I took a picture of the ad (above) and sent it to some friends.

The word stuck and we began using it whenever we took photos of some really nice weed or heady glass.

This went on for about a year before one night, at an afterparty in DC, I was chatting with Troy Dayton from the Arcview Group (which is like Shark Tank for the cannabis industry) when he heard my friend refer to her cannabis photos as “potography.”

Troy and the rest of the group loved the concept and we all encouraged my friend to turn it into an actual photography business. When it became clear that she wasn’t interested, however, I decided to take up the challenge myself.

There was only one problem:

I knew nothing about photography!

I mean, I loved taking photos of weed on my phone, but I didn’t know anything about how to practice photography professionally.

So, naturally, I went for it anyway.

Still, I didn’t really know what I was doing and, after months of trial and error, it became obvious I still had a lot to learn.

I put the project on hold in 2016 in order to focus on growing (with a little bit of policy work sprinkled in here and there). Growing is a true passion of mine and 2016 ended up being a great year for my garden. I won the blue ribbon for “Best Bud” at the 2016 DC State Fair, and then placed first at the Capital Cup later that fall.

Growing is still my favorite hobby and passion, but after seeing how things changed with legalization and after I won those competitions, I started to realize that I needed to leave growing alone as a hobby and a passion, at least for a while.

I got really sick of people asking, “how much you yield, bro?” when all I was trying to do was enjoy the plant and grow my medicine.

After realizing this and noticing some serious issues with the way legalization was unfolding, I turned my attention back to another passion of mine: marijuana politics.

But, by the summer of 2018, I started feeling like politics was eating my soul and taking a toll on my happiness. It became obvious to me that our political system is deeply flawed and that I’d live a sad and empty life trying to convince these assholes in DC to do anything good.

So I started thinking about what I could do next and found myself revisiting the idea of turning “potography” into a cannabis photography website.

At this point, I was using potography.com to host some of my favorite cannabis photos from my garden. Since the site was already half-built (it was super basic and barely functional, but it was there), I began brainstorming ideas for what to do with all my photos.

Eventually I thought, “maybe I could turn my photos into postcards!”

I didn’t even plan to sell the postcards. I just wanted to give them away for free to people who voted in a photo contest I was dreaming up but had no idea how to organize. So I did some research and found zero companies selling cannabis postcards at the time and thought, “maybe I can just start selling these.”

I continued my market research and quickly realized there’s a need for all kinds of cannabis stationery items and not just postcards.

And down the rabbit hole I went…

A year later, I launched potography.com with a full line of greeting cards, postcards, notecards, and gift wrap. I got a bit distracted (or ahead of myself) learning the basics of graphic design and web development, but in the process of learning these new skills I actually realized I could finally implement some of my earlier visions for Potography like the photo contest I was dreaming up in 2018.

Fast-forward to 2020, and I’m finally ready to bring my original visions for Potography to life. It’s beyond exciting to see how things are developing!

Starting with our monthly Photo Contests, Potography’s goal is to cultivate a vibrant and active community of photographers, designers, and artists who are all united by our passion for cannabis and creativity.

Keep an eye out for our monthly photo contest announcements and, if you’re an artist and you love weed, be sure to enter every month for a chance to win! Prizes change each month, so follow us on Instagram to stay in the loop.

Potography celebrates cannabis through photography, design, and all other forms of art. Our monthly photo contest is a fun and friendly way to highlight the artistic talent in the cannabis community as well as the natural beauty of the cannabis plant and the art it inspires.

We’re always on the lookout for new podcast episodes featuring cannabis photographers, and today we have an episode from The Cannabis Hangout featuring CasedGod!

Our February 2021 Photo Contest Results Are In!

January 2021 Photo Contest Results Our first contest of 2021 has ended and it’s already one for the books! While we had a smaller entry

The year 2020 is officially over and our December contest has come to an end. What a wild year it was and, while it definitely wasn’t the best 12 months on record, we’re happy we started our monthly photo contest and definitely plan to continue through 2021…

Custom hemp prints are here— just in time for the holidays!

Custom Hemp Prints Are Now Available! In April, we launched our monthly photo contest featuring fine art hemp prints as prizes, and over the summer

Our November 2020 photo contest has come to a close and the people have spoken! With every shot in this contest being outstanding, our three winners each beat their runners-up by just one vote! All in all, we think this was one of the best contests yet because every shot was just SO GOOD!

Croptober is over and another monthly photo contest has come to an end! This month we had more new contestants than any previous month (excluding our first contest), and we were blown away by the entries. With so many outstanding entries, votes were a bit more spread out than usual and we ended up with a tie for third place! Keep reading for more details…

Our September contest results are in. The voting period has officially ended, votes have been tallied, and the results have been published in the contest gallery. Keep reading to learn more about our September winners…

Hello everyone! We’ve made some important updates to our photo contest. Keep reading to see what’s new with our prize packs and entry methods, and to learn how you can earn FREE votes by sharing your entries on Instagram…

Our August photo contest has come to a close, and for the first time since we started the contest in April, we have a first, second, and third place sweep! On top of that, the winner is our returning champion from July…

July Photo Contest Results Are In!

Our July photo contest has come to a close. We had more votes in this month’s contest than any previous contest, and we would like to start by thanking our growing community for its continued support and participation!

Not a member? Register

Stay up to date with contest announcements and special offers. We won’t spam your inbox. New subscribers get 20% off your first order!